If you saw the 1997 Christian Dior exhibit at The Met and read the placards, you will have noticed that almost all of the most extraordinary gowns, well, really what seemed like almost everything,  belonged to the mysterious Mrs. Byron C. Foy.  I mean a lot, not just one or two or three or even four pieces.  And we don't mean t shirts.  We're talking about huge, gloriously embroidered and beaded ball gowns.  Gowns with names like 'Venus', and 'Junon'.  So, when I left the Dior show, it was not only the work of Mr. Dior that I was thinking about but the toilette of Mrs. Byron C Foy.  For some reason I was trying to imagine Mrs Byron C Foy getting ready to go out, maybe having a cocktail?  A cigarette?  Certainly from a silver engraved cigarette case.  In her dressing room, somewhere there is a ladies maid silently assisting.  These were not dresses to pop on and rush out the door in.  They required time and assistance.  There were hours for afternoon dresses, cocktail dresses and ball gowns.  Amongst the ball gowns was a silk white ball gown with black flowers named 'Odette'.  I desperately wanted a dress that looked like this for my wedding gown - instead I wore John Galliano for the house of Givenchy and was very happy. 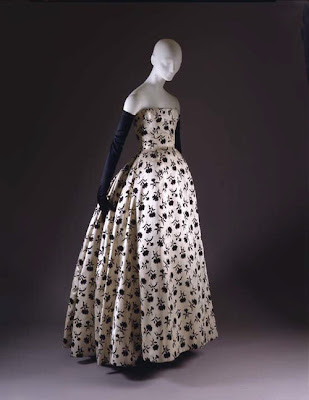 At the recent Model as Muse exhibit at the Met whose name appeared again?  Mrs. Byron C Foy!  She owned the Madame Gres dress famously worn by the model Sunny Harnett and photographed by Avedon. What the??!!!  So, she owned gowns by not just Dior but Balenciaga and Madame Gres too. Grrrr... 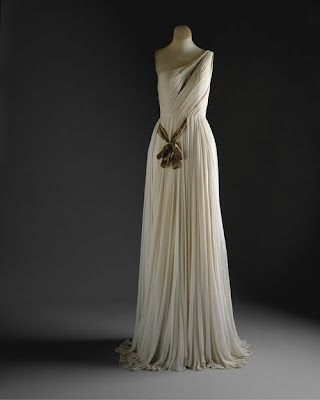 Madame Gres from The Metropolitan Museum of Art
Gift of Mrs. Byron C. Foy
But who Mrs Byron C Foy was a mystery.
Unexpectedly today and with great pleasure, I saw an article in the December issue of Vogue on Mrs. Byron C. Foy by Jean Nathan.   I was happy to see that I was not only the one who was interested in knowing who the woman was to have owned so many extraordinary gowns.  I was a little sad to read what happened to her and I am not sure if maybe my more romantic thoughts  about what her life may have been like are a little changed now.  But I am glad that many pieces from her collection are able to be enjoyed by so many of us and left us not just to wonder about the clothes themselves but the life of the mysterious AND fabulous Mrs. Byron C. Foy. 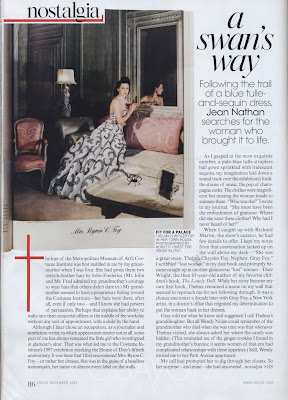 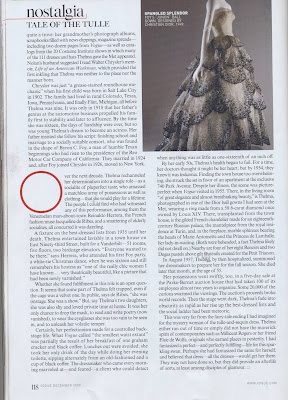