Part Two in our series on Jacqueline de Ribes.  Weekend Reading for you from RARE vintage.  Read on...
"I feel sorry for near-beauties with small noses" said Avedon after taking Jacqueline de Ribes' photograph in the 1950s.  Avedon photographed Jacqueline at the behest of Diana Vreeland who was then editor of Harper's Bazaar.  She had seen Jacqueline at lunch the day before dining with Charles de Beistequi.  Her curiosity was piqued by his sphinx-like companion.  Diana said, 'We'd like Avedon to take your photo tomorrow.'  The next day Jacqueline went to the hair dressers, curled her hair and got false eyelashes.  But when she showed up, Diana said, 'I want you to be like you were yesterday!  She peeled off the eyelashes and combed out her hair.  And she made her a braid.  The picture became famous. 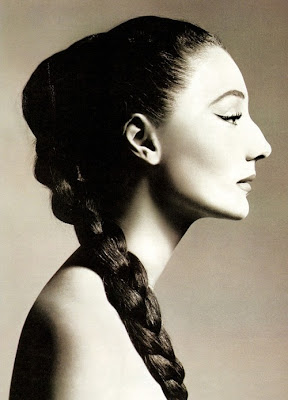 
Avedon’s iconic cameo-like profile portrait of Jacqueline, with the impossibly long neck, exaggerated almond eyes, and improbably thick braid, was eventually published in Life and in the photographer’s anthology Observations, with text by Truman Capote, in which he famously compared Jacqueline, Babe Paley, Marella Agnelli, and Gloria Vanderbilt to “a gathering of swans.”
Jacqueline says, "Between 1950 and 1955, I figured out my style.  It had to do with eye make up.  Everyone said I looked like Nefertiti - I don't, but that's how I got the idea." 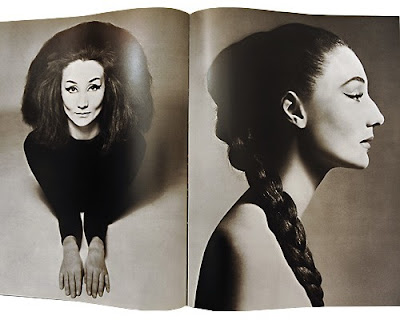 On a trip to New York in 1955, during which time she attended the Knickerbocker Ball (in a Dessès gown), she caught the attention of Oleg Cassini, who found her “elegant to the point of distraction.” Recalls Jacqueline, “Oleg said, ‘I feel you are a frustrated designer. Would you do things for me?’ I came back to Paris, to the attic of my house, and cut dress patterns on the floor. To help me out, I booked the première [head of studio] from Patou, and a worker from Balenciaga. I made the dresses only in toiles [muslins], as I couldn’t afford silk. Then I packed the toiles in boxes to send to Oleg in New York. But first I needed to glue onto each box a nice croquis [fashion sketch] of the contents inside. I couldn’t draw, so Jean Dessès proposed I hire a young Italian in his studio. It was Valentino! He came to my house once or twice a week for about a year. He drew my croquis, but always wanted to add an extra bow, frill, or flower. Valentino would complain—‘I have no money. I live in an attic, with a toilet on the other end. (It is very difficult to imagine Valentino in an attic hovel with no bathroom) I am going back to Rome.’ I told him he could not leave. To be a couturier, I advised him, he had to stay in Paris. Besides, I did not want to lose my dessinateur! Three years later, Valentino opened his own couture house. I was green with jealousy. In the meantime I had closed my attic. So I went to Rome and bought clothes from him.” 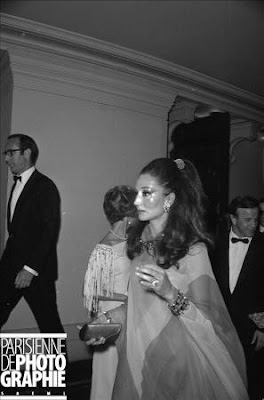 Jacqueline de Ribes was voted onto the best dressed list in 1956 and in 1962 ascended to the Hall of Fame.  "When everyone still cared about how they dressed," says her friend Jayne Wrightsman, "everyone wanted to dress like her and look like her." 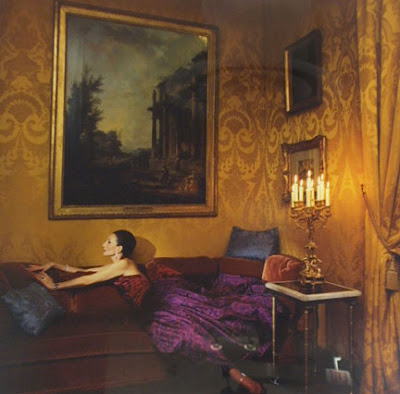 Says Countess Marina Cicogna, "She personified the international idea that French women were the most elegant in the world." 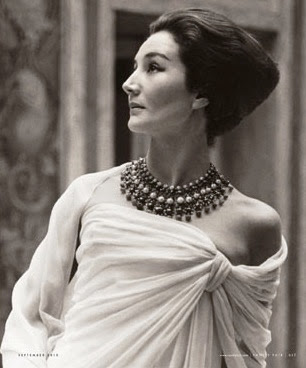 Princess Alexander Romanov said, "I loved to watch her do anything.  To water-ski.  To take off a glove.  She was beyond sex.  She was something not of this world." 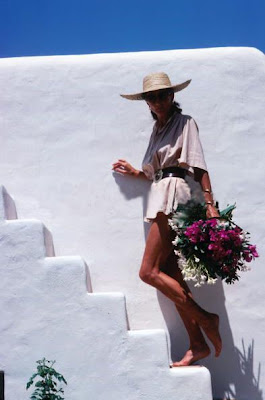 Jacqueline's father-in-law described his renegade relation as a "cross between a Russian Princess and a girl of the Folies Bergere".  Says Carolina Herrera, "She made many parties famous just for walking in and out of them.  The topic of conversation the next day was always what Jacqueline wore. 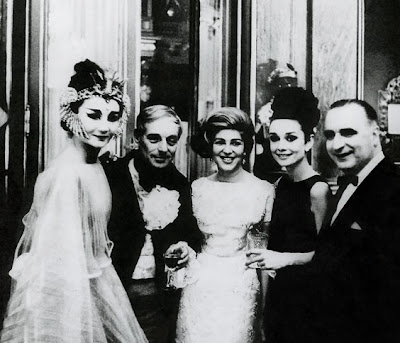 Jacqueline de Ribes in a headpiece that had belonged to Sarah Bernhardt.
To be continued...
Text from The Last Queen of Paris.  Amy Fine Collins.
Posted by RARE vintage at 8:51 AM