When war was declared on September 3, 1939 I was in bed in my Paris flat with an uncomfortable and unbecoming head cold.  Bettina Ballard
Weekend Reading for you from RARE vintage.  Read on...
I went to the police station to get gas masks for Marcelle and me.  When Marcelle turned my bed down and laid out my night clothes, she put my gas mask on a chair with a pair of slacks, a sweater, tennis shoes and a flash light.  This was her idea of the proper garb for a Vogue editor to wear in an air raid shelter.
Edna Chase (Editor in chief of Vogue) immediately sent cables, "How are couturiers coping with the new war conditions?"or "send a story on what smart women are wearing in air-raid shelters, doing war work, etc...".
A few of the courturiers had closed; Mainbocher had closed completely and left for America, Chanel had closed (not to reopen until 1954) and Paquin closed temporarily.  Schiaparelli was inspired to design town bicycling costumes: jackets with big pouch pockets to use instead of a handbag, wraparound skirts with bloomers underneath them, fedora hats - all of which I dutifully reported to New York.
We sketched women dining at Maxim's in chic, black unexaggerated fashions with skirts to mid length, hats tilted over one eye.  I reported that eccentricities were nowhere to be seen, frivolous hats had completely disappeared, although after a few hatless weeks, Madame Suzy rushed back to Paris to see that there was no nonsense as Parisians thinking they could go around without hats.  She quickly devised a cut-velvet snoodlike beret, which, to squat forceful Suzy, had exactly the right percentage of chic and practicality for war.
Bettina Ballard left Paris and did not return until the winter of 1945.
Letters and cables came.  Everyone was evacuating.  Louie Macy was on her way home with Gogo Schiaparelli (Elsa Schiaparelli's daughter) in tow.  Michel de Brunhoff (Editor of French Vogue) had evacuated with his family, his relatives and his office files to a big house outside of Bordeaux.  Elsie Mendl with her husband, Sir Charles, headed for Biarritz in her Rolls-Royce.  Tommy Kernan, the manager of the Vogue office, sent me one last cable from Paris before he left,  "Burying your silver between two trees in the forest of Yvelines."
The last issue of French Vogue published during the war was in 1939.
In 1945, with great difficulty, Michel de Brunhoff, managed to publish the first issue of French Vogue.
Michel de Brunhoff and the remains of the Vogue staff were camping out at the offices of Jardin des Modes, which had continued publication on a small scale during the war.  Little light came in from the dark street, and there were no lights in the office.  The cold air was thick with the odor of nervously cold bodies in old woolens.  I walked through to De Brunhoffs office with a sinking heart - I felt that I was in the antechamber of despair.
Michel looked up startled to say, " C'est vrai? C'est ma Bettina?"  He had aged twenty years in the four and a half years I had not seen him.  His only son, he told me, at seventeen had been hunted down on a farm by the Getsapo and shot, along with several other boys, on the suspicion that they were part of the resistance.
A NOS LECTRICES
Apres quatres ans de silence forcé, nous sommes heureux de pouvoir, malgré les nombreuses fifficultés techniques et mat´rielles que nous avons recontrés, présenter un numéro qui, nous l'espérons, sera jugé par les amis de "Vogue" digne du passé de notre magazine, et des couturiers et des artistes qui y ont collaboré.
Ce n'est pas, hélas!  le premier numero d'une parution mensuelle, normalle et réguliere.  Les conditions économiques ne le permettant pas encore.  C'est un numéro hors-série "Vogue Libération".  Michel de Brunhoff
Vogue Liberation.  January 1945. 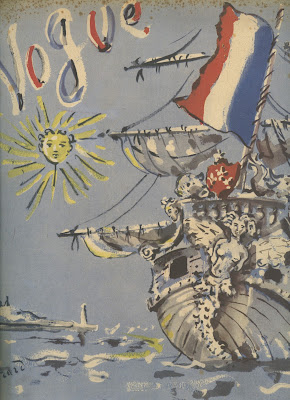 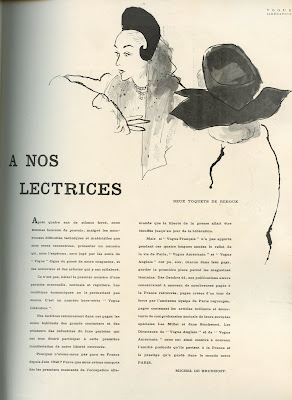 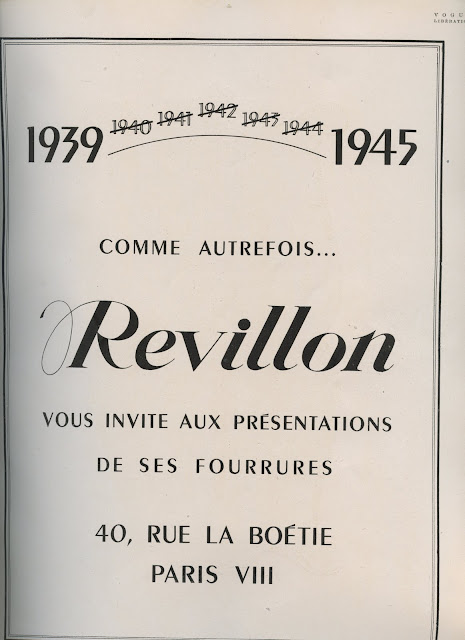 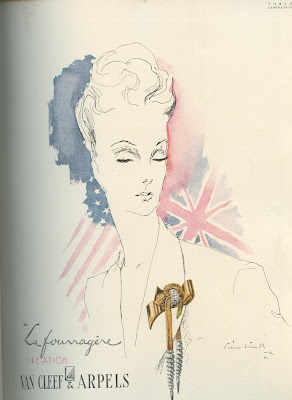 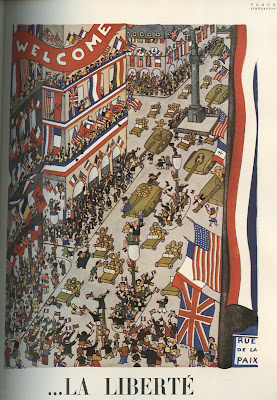 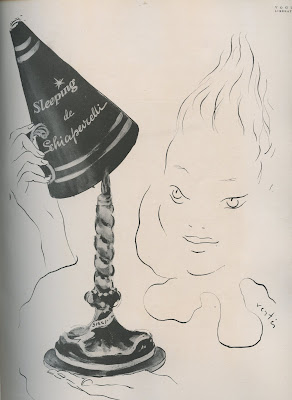 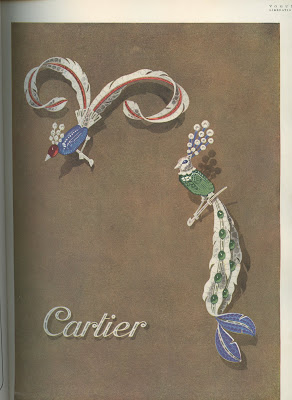 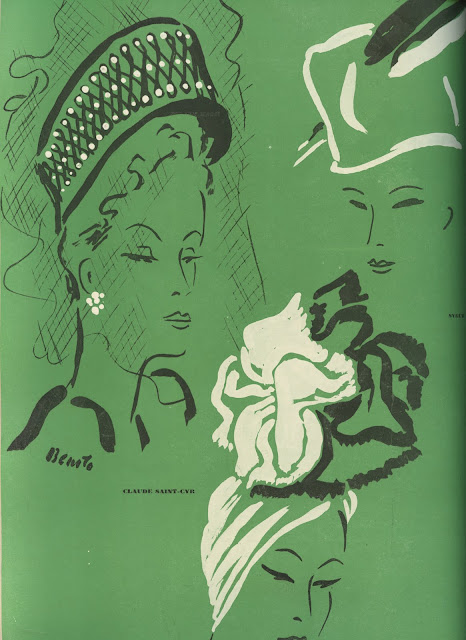 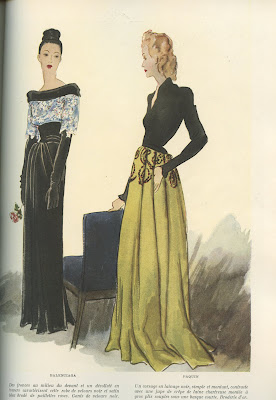 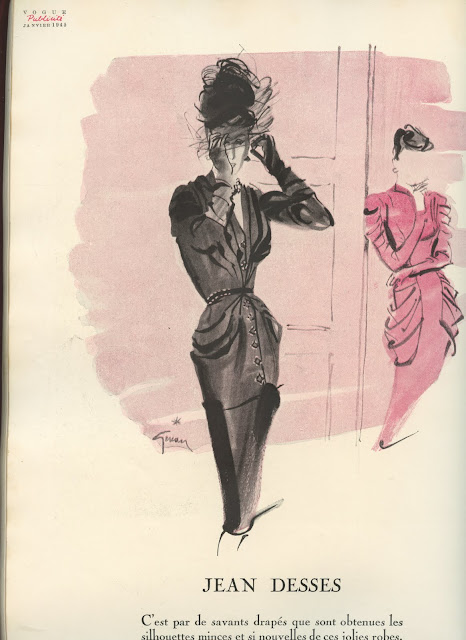 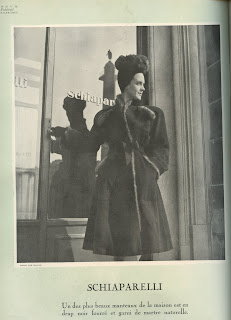 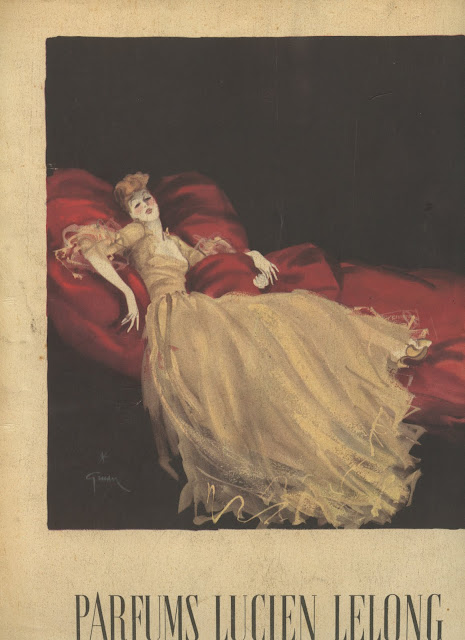 All images from Vogue.
Text from Bettina Ballard's wonderful book, In My Fashion.
Posted by RARE vintage at 10:22 AM